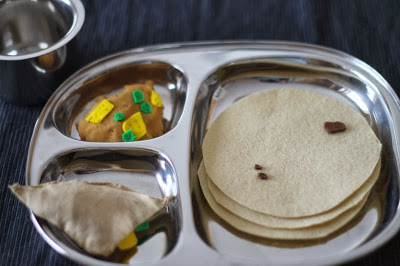 Do you know what that is on the right? No, that’s not a giant cookie. It’s a roti!

These rotis are really easy to make. I cut large circles out of a wheat colored piece of felt and then cut little misshapen blobs out of a brown piece of felt to make the burnt spots found on the Indian flatbread. Using brown cotton thread, I sewed the spots onto the rotis and they were done!

Still feeling pretend hungry? Well, I have a few more fabric delicacies to tell you about.

My kids and I are crazy about mattar paneer, an Indian dish of peas, (mattar), and cheese, (paneer), in a creamy tomato sauce, seen in the upper left of the plate above. I cut some green circles out of felt for the peas, and yellow rectangles for the paneer. I cut two identical shapes out of brown cotton, and sewed the paneer and peas onto one of the pieces. I then used a red thread to sew specks of chili powder onto the paneer, a brown thread to make longer stitches to resemble cumin seeds, and black thread to make the little mustard seed balls that pepper this dish. I then sewed the two pieces of brown cotton together, stuffing it with some cotton scraps as I went around the shape, and, finally, sewed my mattar paneer shut.

Now that you know the Hindi word for peas, we interrupt this play food tutorial for a joke.
Q. What did the happy pea say to the sad pea?
A. What’s the mattar?

Are you done laughing? Great! Let’s continue. Since no trip to a North Indian restaurant is complete without a samosa, I made samosas out of cotton and felt. There is no such thing as too many samosas.

Both were made the same way. I cut two identical triangles out of a wheat colored fabric. I then used scraps of yellow and bright green felt to resemble the potato and pea stuffing, and scraps of brown felt and pale green felt to be the sweet tamarind chutney and savory cilantro chutney samosas are dipped in. I sewed the triangles together with a blanket stitch, stuffing it with scraps of cotton as I went around the sides, and added a bit of the yellow, brown and green felt in the seam to look like the potatoes and peas were coming out of the samosa on one side, and that the samosa had been dipped in brown chutney.

Finally, I felt like we needed some South Indian treats too, so I made idli, sambar and a dosa.

The idli was just two white pieces of felt sewn together with a blanket stitch and stuffed with cotton scraps. For the sambar, I just cut a blog out of a rust-colored piece of felt and sewed spices on like I did with the mattar paneer earlier.

To make the dosa, I cut a circle out of my wheat colored felt. At one end, I sewed yellow rectangles for potatoes and one green sliver for a slice of spicy chili pepper. I sewed some cumin and mustard seeds and chili powder onto the potato as well. Then I rolled the wheat circle and sewed it in place with a blanket stitch and my dosa was done!

And with that, dear reader, it’s time to end this play food tutorial. Do you need one more Hinglish joke to end this post? It doesn’t work unless you know that “nacho” is how you would tell someone to dance in Hindi.

Q. What did the chip say to the cheese at the club?
A. Nacho!

See you next time!

Get in Touch - I love to hear from readers!